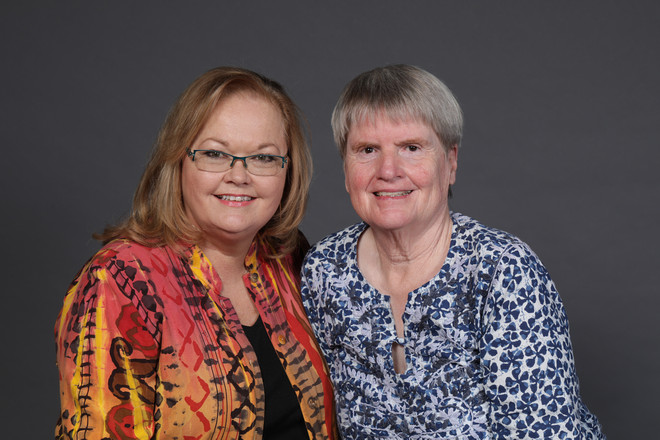 The Two Debs of Altadena have brought their deep experience in photography, videography, nonprofit and corporate communications, newspapers, magazines, and public relations, to their business, DebSquaredPhoto. They have a full soundproof insert studio and gardens in which to photograph clients.

News, portrait, and nature photographer/videographer, photos made in 30 countries, raised in Chicago, ripened in California, Deb Halberstadt, has created compelling images since the age of 15.

Deb was a high school and college photographer. After graduation, she founded and co-owned a weekly newspaper in Chicago’s western suburbs. Afterward, she was hired for a “man’s job” with the AP/Chicago and was transferred to LA.  Deb was first taken seriously during SoCal’s rainy season covering a story of an ill-fated hippopotamus, Bubbles, who managed to burrow under a fence, lumber away from Lion Country Safari and cause quite a hullabaloo as wandering hippos will do.

Deb was plucked from the AP to be the Manager of Still Photography at the NBC network during the Grant Tinker – Brandon Tartikoff  - Stephen Bochco – Michael Mann era. She then founded and ran HalfCity Productions for many years.

Deb is married to Jon Hainer, is a Volunteer on Patrol for the Altadena Sheriff’s Station, Altadena LASD CERT Civilian Coordinator, American Red Cross San Gabriel Valley/Pomona Ambassador for Altadena, and a member of the Map Your Neighborhood Committee.  Preparedness is her middle name.

We interrupt to let you know what our clients have to say...

IT'S ALWAYS A PLEASURE WORKING WITH
THE TWO DEBS. I ALWAYS GET EXACTLY WHAT I NEED.

-- DOUG COLLIFLOWER, THE REALTOR THAT'S GOOD FOR YOU

I JUST WATCHED THE TESTIMONIALS YOU FILMED AND THEY ARE WONDERFUL. YOUR QUESTIONING WAS GREAT AND THERE ARE SO MANY GOLDEN NUGGETS. I'M EXCITED TO POST THESE ENDORSEMENTS. YOU'RE BOTH AWESOME!

Debbi Swanson Patrick moved to Altadena in 1995 to get out of the crazy traffic-jammed Westside. And love Altadena she does. She started blogging early as Altadena Above it All to show off all the beauty here.

Debbi started shooting pictures in high school and had several shows during college when she also worked on the college newspaper, the CSUN Sun.

From then until now she’s been a working journalist on the radio and writing for a multitude of newspapers, magazines, and online media. That was in addition to her day jobs in advertising, PR for theatre and the legendary Bob Hope, and in Development/marketing for City of Hope and Caltech.

Debbi produces award-winning digital fine art under the name Telling Images, is a member of several art groups, and is now Director of Communications for the Pasadena Society of Artists. She’s a member of and former newsletter editor for the Pasadena Elks, served Altadena on the Sheriff’s Community Advisory Committee and as a board member of Altadena Heritage. An Altadena point of pride, she lives in the house where Lonnie Bunch III, founder of the Smithsonian African American Museum and now head of the entire Smithsonian Institute, lived in the 1980s when he was head of the California African American Museum.

Both Debs are involved with Altadena’s Open Studios Art Tour and love their dogs–a total of five–two German Shepherds, two Shelties, and a big ole Lab. Free bags of dog hair are available upon request.